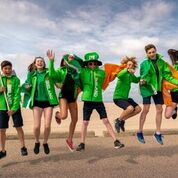 After a week of training, the first racing day saw light winds which picked up for the rest of the week with brilliant sunshine and clear skies. The tide in Scheveningen was challenging for all sailors but they managed to hold their own and took several top ten spots throughout the five championship days including one bullet, leading to an incredible six out of Team Ireland’s seven qualifying for Gold Fleet.

The young sailors experienced highs and lows throughout the week of intense racing and the final day brought its own pressure with only one race to determine the final results. Overall, they achieved the best collective performance of the last 20 years securing a top-ten spot in Boys Gold fleet with Sam in 9th, Johnny 28th, Nathan 54th and Rocco (the youngest sailor) 63rd. In Girls Gold Fleet Leah took 16th and Emily 19th and Eimer earned an excellent top-ten 7th in Girls Silver Fleet.

Team Ireland on Turn the Tide on Plastic with Annalise Murphy

One of the big highlights of the week was a fabulous tour of the Volvo Ocean race boat “Turn the tide on plastic” with Olympic silver medallist Annalise Murphy.

The Team’s success at the Europeans has been down to hard work and commitment from the sailors over the long winter months but also thanks to the fantastic professional support provided by Thomas Chaix and Ciara Peelo in preparing for the Championships and supporting the sailors in every way on and off the water throughout the competition.